For the first official blog post of the panelmonkey.org/The Sprite Cemetery what do I choose to talk about? My history with The People's Sprites? How I bought the URL? Why the Name change? Nope.

How the Yuri Genre of Anime Annoys me Personally: The Happy Ending.
WHY DON'T WE EVER GET ONE!?

I have been watching yuri themed anime for a couple of years now and I kept noticing something rather odd. I couldn't quite think what it was at first. Then I watched Aoi Hanna (Sweet Blue Flowers.) First Fumi Manjoume's heart gets broken by her cousin (who probably was only bi-curious and not really gay.) Then a heart wrenching confession of her sexuality to her friend Akira Okudaira. Then another crushing heart break by Yasuko Sugimoto who not only outed Fumi against her will and then dumped her most likely because Yasuko probably wasn't even gay curious, just going out with Fumi as a rebound relationship. 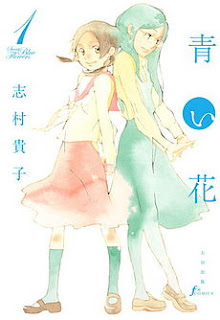 After all that what does Fumi get for a a happy ending? Standing in the snow with her best friend Akira. No confession of love, no dancing, no laying together naked (it's anime, of course those sixteen year old girl are going to get naked) LIKE IN THE OPENING CREDITS! Sure they hold hands as they walk away into the night, but is it too much to ask for a kiss? 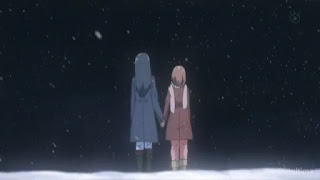 Destiny of the ShrineMaidens pissed me off big time. We start of with the maid Outoha who loves her mistress Chikane Hemimiya but because of their social statuses all Outoha can do is cheer on Chikane. Chikane is in love with Himeko Kukrusugawa. Chikane thinks that since they are both women she can never be with Himeko. Looks like we have two lonely lesbians here. That is until Chikane turns into the psycho bitch and rapes Himeko and then tortures her during the last battle. As Chikane lays dying in Himeko's arms she tells her what she was really doing and confesses her love for Himeko. Then Chikane is healed and they hold hands, hug, get naked (of course, this is anime,) and vow to stand together against all odds. It seems all odds won out when Chikane is ripped away from Himeko, thrown in a closet and the door is shut on that relationship. As Himeko walks ever so lonely to school we see the ever so lonely Outoha looking forlornly at a tree and a hit parade of all the villains having their histories rewritten into happy endings. 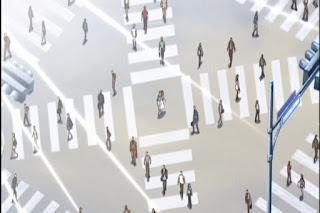 We are thrown a bone during the last minute of the last episode when Himeko meets a reincarnated Chikane at an intersection and they hug. Did we really need the Fushigi Yugi ending? Couldn't Himeko and Chikane been allowed to have walked hand in hand to school with Outoha cheering them on? At least it's better than the manga ending. They were reincarnated as twin sisters. Maybe that was the inspiration for Candy Boy. (That's a rant for another time.) 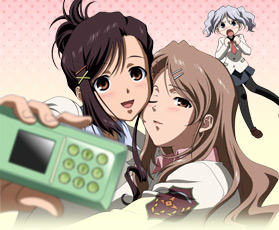 Sakura Trick, Yuru Yuri, and Kiniro Mosiac do come to mind, but these are comedies. They are not meant to tell some great story. While Sakura Trick comes closest to some drama, it falls just short. Don't get me wrong, I like all three series, I watch them over and over. They are meant to give you that warm fuzzy, not make a dramatic statement.

What I want is the hand holding, fingers interlocked, in bed together, or wake up from a night of bliss, declaration of love moment that either ends or begins a series.

One that comes to mind is Yuri Kuma Arashi. Kureha Tsubaki and Ginko Yurishiro do have that declaration of love, hug, promised kiss, and holding paws moment. Then a firing squad unloads on them. By firing squad unloads on them I mean a line up of girls with guns sends a lot of bullets in our heroines' direction. When we see them next they are walking around a higher plain of existence. Now did they escape the hail of gunfire or did Kureha and Ginko die of lead poisoning before ascending to this higher plain?

How about Steel Angel Kurumi 2? (What I call Project AKo part 2.) We do have Kurumi carrying Nako Kagura off to school. Nako is happy, Kurumi is happy, Karinka is happy, Uruka Sumeragi is happy, and Saki is happy. Everybody is happy. Really? It's been a few many years since I watched this so I don't remember Nako making any declaration of love for Kurumi. Keep in mind Kurumi is a robot that has obedience code hard wired into her. She is in love with whom ever kisses her first. Unlike Karinka who breaks this code, Kurumi never does. So is Kurumi in love with Nako because of her own free will and doesn't mind the obedience code or is she in love with Nako because of the code? As far as I can recall this is the same Kurumi from the first series that was in love with Nako's ancestor Nakahito Kagura. 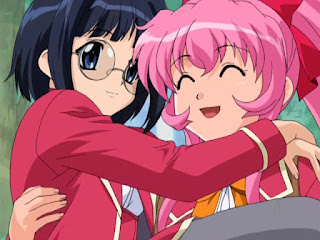 Here we have RevolutionaryGirl Utena the Movie. All weirdness aside, we do have Utena Tenjo and Anthy Himemiya (any relation to Chikane?) kissing and naked (this is anime, so of course those I don't know how old they are girls are going to be naked,) rolling of down the road together forever. Pretty ground breaking for 1999. Still, I can't leave the weirdness aside. 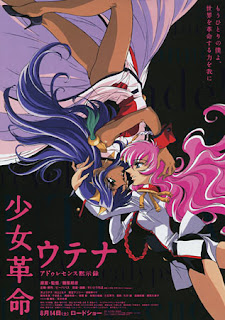 So far I have limited my rant to commercially made anime. By commercially made I mean its purpose is to sell merch of some kind. DVDs, Blu-Rays, toys, laundry detergent, so on and so forth. Telling a story isn't a priority. If there is a story that's just incidental.

If I open up my diatribe to OVA sold at a Comiket we find Kuttsukiboshi (Stars Intertwined.) While not as weird as Utena was, there is enough yuri tropes from the bad old days in these two episodes to rant about for several pages of Open Office Writer with the font set at 12. To some up it's psycho bitch Aaya Saitou meets psycho/psychic bitch Kiiko Kawakami. We do have the confession of love in an airplane bathroom. The hand holding fingers interlocked while plummeting to the Earth at terminal velocity. The together forever (naked, of course) moment on some other planet, alone. I guess the lesbians can be together if no one can see them. 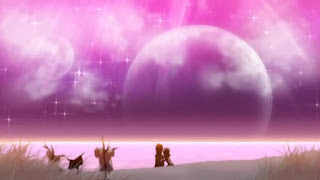 It's 2015. If Akuma no Riddle had a yaoi couple together happy out in the open for all to see, why not a yuri couple?